This statement was originally published on europeanjournalists.org on 30 July 2020.

The year 2020 seems to add another sad chapter on the decline of media freedom in Europe. Main reasons were the impact of the COVID-19 crisis, police violence and online harassment. Find all details in first MFRR-report.

The monitoring report compiled by European Federation of Journalists (EFJ) and International Press Institute (IPI), with support from ECPMF, gives unprecedented insight into the threats to media freedom in EU member states and Candidate Countries. Within the monitored period from March to June a total of 120 alerts were registered on the mappingmediafreedom.org platform from two-thirds of the countries covered by the MFRR. This data is the basis for the present report. EFJ, IPI and ECPMF are part of the Media Freedom Rapid Response consortium.

One key trend observed is the negative impact of the COVID-19 pandemic on media freedom. Some governments used the pandemic as a pretext to restrict democratic discourse or reinforce authoritarian tendencies. In Hungary Prime Minister Viktor Orbán pursued tighter information control and intensified its now decade-long campaign to discredit and undermine critical journalism. Meanwhile, new criminal legislation against the spreading of “false” or “distorted” information, passed during the state of emergency, caused uncertainty and self-censorship among media outlets and actors. Hungary must be regarded as an outstanding example, but restrictions of media freedom due to COVID-19 were also seen in other European countries – mappingmediafreedom.org registered 37 alerts related to the pandemic.

Another trend are the dangers to journalists and media workers when covering protests and demonstrations. The beginning of 2020 has seen unprecedented public protest across Europe, protesting on a range of issues including opposition to governments’ responses to the COVID-19 pandemic, calls for addressing systematic racism, as well as right wing opposition to these movements. At a number of protests in countries such as Germany, France, UK and Italy, journalists and media workers were verbally harassed and threatened, while in a majority of alerts (17) they were attacked, leaving some in need of medical treatment. The report highlights that in total, 45 journalists and media workers were attacked between March and June during demonstrations and protests according to 28 alerts from EU Member States and Candidate Countries.

Demonstrators are not the only risk to media professionals. As the report shows, violence and threats from police officers and security services is second only to attacks from private individuals. The responsibility of the police to protect journalists against threats and attacks has been neglected; in some countries security forces actively tried to hinder media workers from doing their jobs. In 2019 ECPMF’s launched the Media Freedom Police Codex to address this problem.

In general the range of different types of threats faced by media workers is broad. According to the MFRR analysis, the most common type of threat is Intimidation/Threatening (59), followed by Insult/Abuse (26). These threats can have a devastating effect on a journalist’s ability to do their job. In Italy at least 20 journalists and TV presenters live under 24-hour police guard, many due to threats made against them both online and off. Gender-based abuse against women in journalism, oftentimes shared online, often includes threats of sexual violence and represents a significant threat that needs immediate and robust attention.

The Media Freedom Rapid Response (MFRR) was launched in March 2020 to support at-risk journalists and media workers across the EU Member States and Candidate Countries. Mapping Media Freedom is a platform that enables anyone to upload details of an attack, threat or media freedom violation and help to visualise and collect information about media freedom across Europe. The European Federation of Journalists (EFJ) and the International Press Institute (IPI), with support from the European Centre for Press and Media Freedom (ECPMF) form the expert network that verifies, analyses and publishes all alerts on the platform. These alerts form the basis of the Mapping Media Freedom Monitoring Report. 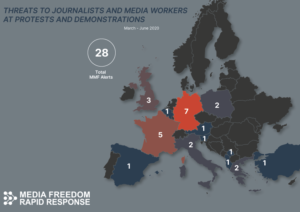 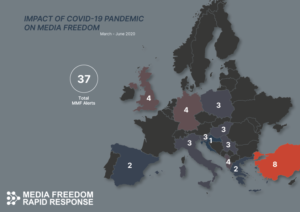 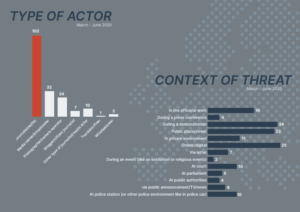 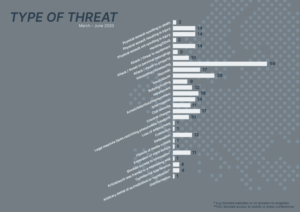 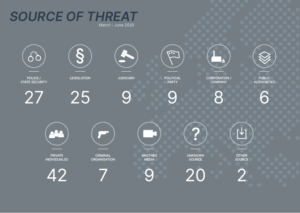 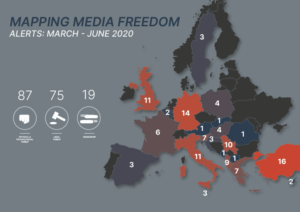 This statement is part of the Media Freedom Rapid Response (MFRR), a Europe-wide mechanism, which tracks, monitors and responds to violations of press and media freedom in EU Member States and Candidate Countries. This project, co-funded by the European Commission, provides legal and practical support, public advocacy and information to protect journalists and media workers.

The post 120 alerts in 4 months: Severe threats to press freedom across Europe appeared first on IFEX.