This statement was originally published on ifj.org on 16 March 2021.

The Office of the Attorney General of Samoa threatened the Samoa Observer with a legal investigation into its reporting of perceived conflict of interests pertaining to retainer agreements between the government and the Attorney General’s former law firm. The International Federation of Journalists (IFJ) expresses solidarity with journalists at the Samoa Observer who are under pressure by the Samoan Government’s attempts to silence anyone speaking out on press freedoms and threats to journalists. 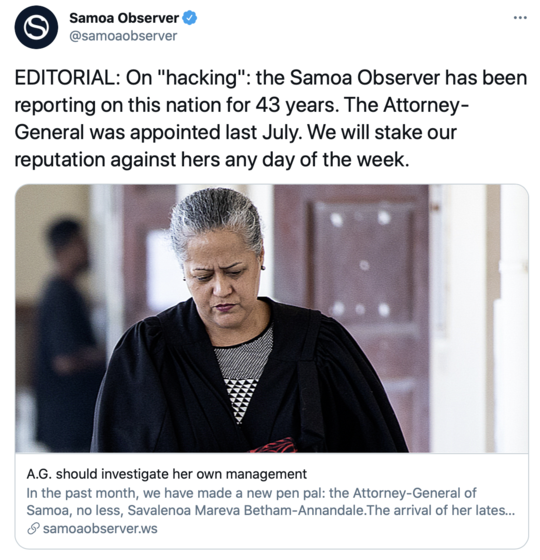 The Office of the Attorney General published two press releases on March 12 in response to reporting from the Samoa Observer. The press releases threatened the Samoa Observer and said “initial internal assessment suggests that the said documents could only have been obtained by hacking our email systems. Hacking email systems is a criminal offence under Part 18 of the Crimes Act 2013.” The Office of the Attorney General also said a full investigation would be opened into how the documents were obtained by the Samoa Observer, commenting on how “the level of journalism is quite concerning” and “the lack of attention to detail demonstrates the calibre of Samoa Observer’s source … and Samoa Observer’s inability to vet not only their sources but their motives.”

The IFJ said: “Questioning a government and its actions is a crucial component of a functioning democracy and critical journalism. The IFJ expresses solidarity with journalists and their sources in Samoa who are being subject to legal threats and investigations that seek to prevent them from reporting on the truth. The IFJ implore the Attorney General to retract the statements made by her office and allow the Samoa Observer to operate without political interference.”