On 23 December, Brazilian IFEX-ALC members, the Brazilian Association of Investigative Journalism (Abraji), and ARTIGO 19, alongside seven other organizations working on freedom of expression, signed a joint statement condemning judicial censorship imposed on the news portal and agency Ponte. The decision also affected sites that republished the content, including Alma Preta.

Back in September, Ponte had reported on the conviction of Luanna Efigenia de Sousa Teófilo, a  woman forced to pay more than 15,000 Brazilian Reais (about USD 2900) to her former company and to remove social network posts in which she denounced episodes of alleged racial discrimination promoted by her former boss. Subsequently, a judge ordered the articles on the case published by Ponte and Alma Preta to be removed. The judge also imposed a fine of 2,000 Brazilian Reais (USD 380) per day if they disobeyed the takedown order, and this would be applicable not only to the two sites, but also to other communication companies that disclosed the news, such as Yahoo.

This followed another worrisome judicial decision that ordered The Intercept Brasil to alter an article covering the case of the rape of Mariana Ferrer. The Intercept journalist, Schirlei Alves, argued in the article that the judge and prosecutor on the case had accepted the thesis of an ‘involuntary rape’ in acquitting the accused, given the prosecutor’s argument that there had been no intention to rape. The outlet and journalist were ordered to alter the content under penalty of a daily fine.

The Committee to Protect Journalists (CPJ) also reported on the case, affirming that “[j]udges are not editors, and their decisions should not interfere with editorial decisions or the right of the press to report freely.”

The representatives of award-winning journalist Jineth Bedoya called out the Colombian Attorney General’s Office for its “constant negligence, lack of commitment and disrespect towards” their client. According to them, on 17 December, the Attorney General’s Office did not attend the meeting convened by the Chancellery to follow up on the implementation of precautionary measures granted by the Inter-American Commission on Human Rights (IACHR) in favour of Bedoya. The Public Prosecutor’s Office was to report on progress in criminal investigations into the events of May 2000 that violated the life, integrity and freedom of expression of the journalist.

The Prosecutor’s Office has not made progress in the investigation against the masterminds behind these crimes. Bedoya continued to be repeatedly harassed in 2020.

IFEX Colombian member Fundación para la Libertad de Prensa (FLIP) affirmedthat “[i]t is very serious that, even in view of the precautionary measures granted by the Inter-American Commission on Human Rights, the Colombian State has failed to take serious and effective measures to protect the life and integrity of Jineth Bedoya; and to investigate, judge and punish the facts of which she was a victim.”

According to IFEX member ARTICLE 19, “after two years in office, the justifications for not combating violence against journalists are inadmissible. There is an urgent need for coordination between powers and levels of government to take the necessary measures to protect the lives and integrity of journalists in Mexico and to implement measures to ensure non-repetition.” 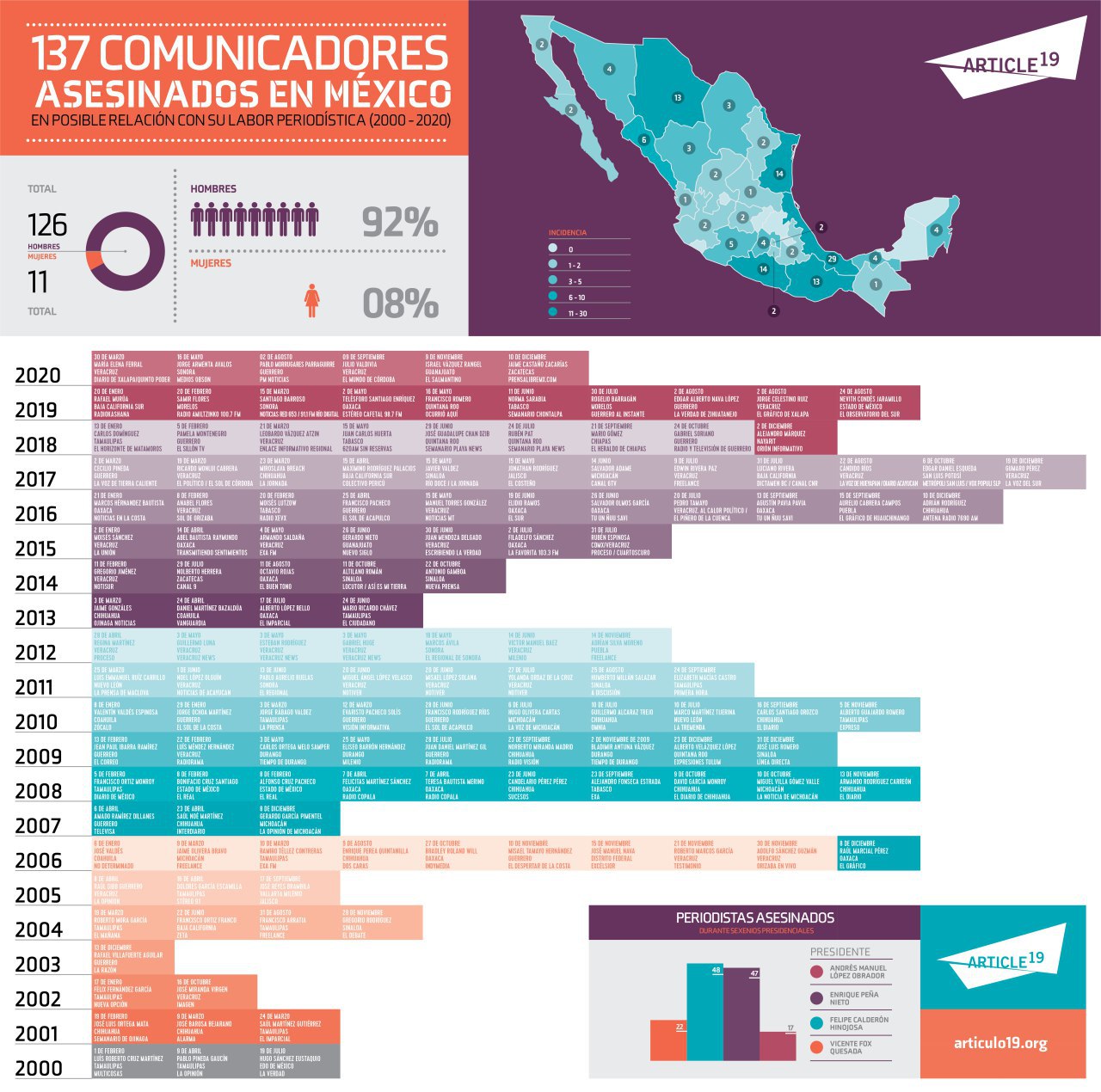 In Honduras, the journalist and owner of Radio Bambi 97.9 FM “La Voz de Culmí”, Pedro Arcángel Canelas, was assassinated on 19 December 2020, in the municipality of Dulce Nombre de Culmí, department of Olancho. The journalist was attacked by an unknown man on a motorcycle who suddenly approached and shot him. He was taken to hospital, but later died from his injuries. The murder of Canelas was the fourth in 2020 in Honduras, according to ARTICLE 19.

The journalist Felipe Guevara died on 23 December from the four bullet hits he received two days earlier in the Mariano Ramos neighborhood, east of Cali, Colombia. The crime took place despite Guevara’s complaints to the authorities about the risk to his life, as a result of his work as a journalist. No preventive measures were put in place and no progress was seen in the investigations concerning the threats. According to FLIP, Felipe Guevara becomes the second murdered journalist in 2020 in Colombia due to the regular exercise of journalism.

Venezuela: The risks of environmental journalism

IPYS Venezuela collected testimonies from Venezuelan journalists who have worked on socio-environmental issues in the country during 2020. Through the interviews, the organization collected information on the most common limitations reporters face in covering situations where the environment and human rights are at risk.

The seven most prominent challenges identified by journalists were: lack of up-to-date official data, the high cost of traveling to isolated areas, gasoline shortages, failures in telecommunications services in rural sectors, fear or suspicion of community members to report on cases, lack of response from state authorities, and crime. IPYS unpacks these challenges through a series of real cases that provide not only an overview of the environmental situation in the country, but also a panorama of how intrinsically related the attacks on the environment and violations to human rights – including the right to freedom of expression and information – are. According to one of the journalists:

“We need to get the very clear idea that environmental problems are not purely environmental. They cross-cut other topics: corruption, trafficking, economics, politics. So by being aware of that transversality, we can connect the dots and edges that may interest audiences, make people understand that this problem matters. This can make environmental journalism a stronger branch.”

You can read the stories and testimonies here.

In early December 2020, the Uruguayan Senate considered the adoption of a new legal provision establishing that up that 20% of official national advertising funds should be directed to inland media – that is, media outlets located outside of the major urban centers, in particular, outside the capital Montevideo.

IFEX-ALC member Centro de Archivos y Acceso a la Información Pública (CAinfo) argued against the proposal. For many years, CAinfo has been calling for the country’s inland media to be considered in the allocation of official publicity. However, they consider that the Senate-driven initiative does not set forth the necessary provisions to fully inform how this allocation should take place. In particular, it fails to establish clear and transparent mechanisms that could address the issue of discretionary allocation of those funds.

In 2018, CAinfo proposed a bill on the subject that was presented to the Chamber of Deputies by representatives of several parties. The bill was approved in that house almost unanimously. However, in the Senate there was no agreement, and the bill was put aside. The organization now calls on Uruguayan legislators to address the issue through meaningful debates and proposes a rediscussion of the 2018 proposal.

Also in Colombia: A reform with no debate and no transparency?

In mid-December, IFEX members expressed concern with the progress of reforming the Colombian Electoral Code. According to them, changes have been pushed through without sufficient debate or transparency.

In addition, the bill includes several troubling articles, including, for example:

Organisations have called for increased participation and the modification of these and other provisions, and have promised to question the constitutionality of the bill at the Supreme Court.

In Mexico, the Communications and Transport Commission of the Chamber of Deputies has approved a revision of the Federal Telecommunications and Broadcasting Law to create a National Registry of Mobile Phone Users, which seeks to create a mandatory telephone line registry associated with biometric identity. This poses a serious risk to the privacy and security of citizens. Crime prevention was the main justification for the reforms.

According to IFEX member R3D, the normative is worrisome for three main reasons:

Researcher Patricio Velasco, from Derechos Digitales, presents an interesting account about the growing role of algorithms in decision-making in all areas of our lives, especially in public policy. He questions the efficacy of some machine-driven solutions and calls attention to the limitations and biases underlying them, reminding us that behind them, there is always a human. “That is why we must take special precautions when it comes to promoting the implementation of technological solutions to complex problems.” These are not mere technical developments – a political decision is often at the bottom of supposedly neutral scientific decisions.

A right to communication

This December, Ecuador’s National Assembly adopted a revision to article 5 of the Organic Law of Communications. According to the new wording adopted, communication is now considered a human right.

Women and LGBTQI+ persons are disproportionately vulnerable to cyber attacks. Digital security becomes, therefore, a key element in the prevention of gender-based harassment and violence. It is also central for the construction of a more plural and socially diverse online civic space. The Asociación para los Derechos Civiles (ADC) reminds us, however, that “from a human rights perspective, digital security focuses on people’s ability to act online freely and accountably. For this reason, the policies and initiatives linked to it should not be limited to playing a defensive role – they should have the enhancement of people’s well-being as the central axis.”

The organization provides a series of tips and tools to help people take back control over the technologies we use on a daily basis. Check out the illustration below, and access the publication Cómo empezar a cuidar tu seguridad digital?

The post From racism to biometric data – old and new challenges to the exercise of rights in the Americas appeared first on IFEX.