This statement was originally published on 7amleh.org on 30 September 2021.

7amleh – The Arab Center for the Advancement of Social Media has launched a new study entitled, “Hateful Network: Hate Speech on Social Media Platforms Among Palestinians and its Impact on Their Digital Rights,” which sheds light on the spread of hate speech among Palestinians in the digital space and its repercussions on their digital rights.

The study indicates a noticeable increase in the use of hate speech among Palestinians on social media platforms, influenced by events and tensions in regional politics, as well as by global events generally. Hate speech is influenced by internal disturbances and changes in the Palestinian scene, particularly at the social and political levels, whether In the West Bank, Gaza Strip, Jerusalem, or in the 1948 territories. With the expansion of the virtual space, and the increasing presence on social media platforms, the behavior of Palestinians virtually has become a mirror of what is happening on the ground. The dynamics of using social media and participation in shaping the Palestinian public discourse contribute to placing Palestinian digital rights at risk, not only by the Israeli authorities and companies, but also by the Palestinian Authority in the West Bank and the de facto authority in the Gaza Strip, as well as the societal authority, which is represented by customs, traditions, and dominant narratives in the Palestinian context.

The study presented a set of recommendations to confront hate speech on social media platforms among Palestinians. The recommendations revolved around the principle of “confronting speech with speech.” They also emphasized the necessity of translating this into practical steps, through immediate and rapid intervention to confront hate speech, emphasizing the difference between freedom of expression and hate speech, and organizing activities that combat or resist hate speech on social media, as well as the need to build media education for all. 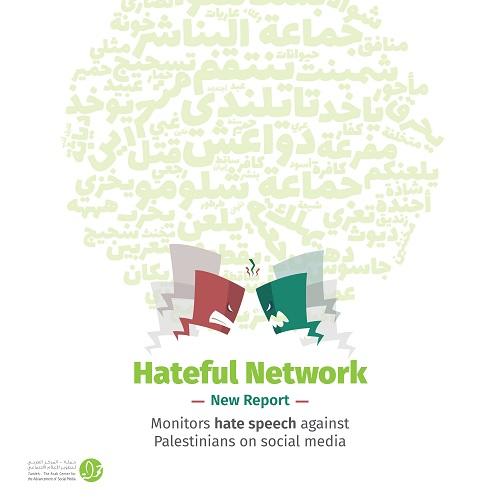 The post Hateful Network: How online hate speech amongst Palestinians is impacting their digital rights appeared first on IFEX.