This statement was originally published on cipesa.org on 7 October 2020.

The spread of false or misleading information online is due to various reasons. A recent BBC study on fake news in Africa found that sharing news online can be socially validating; because “being the first to share a story in your group of friends, showing others you are in the know and provoking discussion make social media users feel good. Sometimes people will rush to share information not knowing if it is true.” The study added: “… most people do not consume their online news in-depth or critically, and many users will share stories based on a headline or image without having digested it in detail themselves.”

In Malawi, the combination of the lack of an enabling access to information law and limited access to the internet has left Malawians vulnerable to misinformation and disinformation.

On December 14, 2016, Malawi Parliament passed an Access to Information Bill, 12 years after its drafting. The then President, Peter Mutharika, assented to the bill into law on February 15, 2017. The purpose of the law is to promote transparency and accountability in the country by providing for “the right of access to information in the custody of the public bodies and relevant private bodies; the process and the procedures related to obtaining the information.”

The news of the presidential assent was perfectly timed – as it coincided with a BBC Africa debate on “fake news” at Ryalls Hotel, in Malawi’s Commercial City, Blantyre. In attendance was the Minister of Information and the State President’s Director of Communications. While the President was rightly applauded for assenting to the bill, the timing of the announcement on a live BBC programme appeared to be a government publicity stunt. Consequently, some analysts warned of a long battle ahead to get the law operationalised.

The long struggle to have the access to information law passed and operationalised is an indication of the resolve of successive political administrations to limit the flow of information held by public institutions. This may be the reason why for a long time the Malawi government has also shown little interest in improving access to Information and Communications Technology (ICT) – which have been proven to broaden information flow and provide platforms for citizens to demand transparency and accountability of duty bearers.

Print media is also scarce and expensive. With just two leading media groups – Nation Publication Limited (NPL) and The Times Group, Malawi has only two daily newspapers (with a circulation of 9,000 each), two Saturday newspapers and two Sunday newspapers with a combined circulation of 12,000 in a population of 17.5 million. Newspapers are all in English, a language spoken by the minority. The newspapers cost K600 ($0.79), for Sunday to Friday and Saturday papers, which has a vernacular language cost of K700 ($0.92) per copy, which translates to about K14,400 ($5.81) and K2,800 (3.69) monthly, against a national minimum monthly wage of K35,000 (USD 46.82).

Misinformation during the annulled May 2019 elections

In the period leading up to and immediately after the May 2019 elections, Malawi witnessed an increase in the spread of misinformation.

The results of that election, which saw the incumbent President, Peter Mutharika of Democratic Progressive Party (DPP) declared winner with 38.6%, followed by Malawi Congress Party’s (MCP) Lazarus Chakwera with 35.4% and Saulos Chilima of UTM in third position with 20.2% were annulled by the Constitutional Court after the losing candidates challenged the outcome citing several irregularities including ballot tampering.

During the court proceedings, civil society organisations (CSOs), particularly Human Rights Defenders Coalition (HRDC), joined by the opposition parties and ordinary Malawians took to the streets, demanding the resignation of Malawi Electoral Commission (MEC) Chairperson, Justice Jane Ansah, for her part in the electoral fraud. In spite of government attempts to stop the demonstrations, courts upheld citizens’ rights to assembly and association, with the military at hand to ensure demonstrations were peaceful.

Alongside the peaceful demonstrations, print, broadcast and social media also provided platforms for mobilisation and engagement. However, the same platforms also proved to be fruitful ground for counterattack and smear campaigns by Peter Mutharika’s sympathisers against the CSOs and opposition parties. Most notable were altered front page headlines in the two leading daily newspapers and their weekend sister papers. The headlines were altered to change the news agenda and narrative on social media.

For instance, The Nation newspaper’s September 26, 2019 edition (below) had a front page story titled: “DPP, PROTESTERS CLASH FOIL MARCH”, with subheadings: “HRDC calls for anti-Ansah demo” and “Activist Mayaya, 4 others injured.” Mutharika supporters altered the headline and disseminated the page online reading instead: “ANGRY MALAWIANS BEAT BILLY MAYAYA”, with subheadings: “We are tired of your demos” and “HRDC violence destroyed lives.” Billy Mayaya is a leading member of HRDC, organisers of the demonstrations. 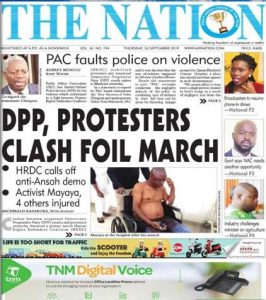 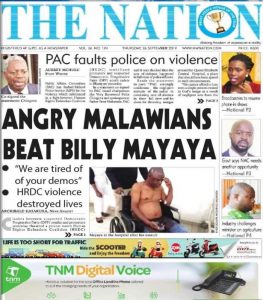 A similar example is of The Sunday Times  edition of October 13, 2019 (below), which featured a story of the then leader of HDRC, Timothy Mtambo surviving an attempt on his life by suspected state operatives. The headline “I SURVIVED ASSASSINATION ATTEMPT BY [GOD’S] GRACE – MTAMBO” was altered and disseminated online as “I FAKED ASSASSINATION ATTEMPT FOR SYMPATHY – MTAMBO.” 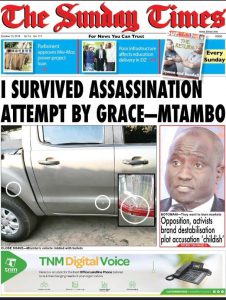 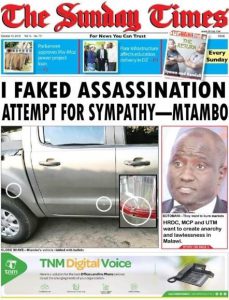 It is clear in these cases that the misinformation was created to discredit the CSOs position on MEC and its chairperson, Jane Ansah. Considering the low newspaper circulation and the high reliance on bundled internet for social media access, it is very difficult for the unsuspecting public, without access to newspapers or the Internet outside of data plans, to identify the irregularities in the above newspaper illustrations.

What is to be done?

On June 23, 2020, Malawi held a Constitutional Court-ordered fresh presidential election which was won by Lazarus Chakwera. The new government has promised to undertake a series of public reforms, one of which is to operationalise the access to information law, which has been Gazetted and becomes operational on September 30, 2020. The President said operationalising the law is one way of “[ending] the era of government secrecy”. Likewise, the new Minister of Information, Gospel Kazako – a veteran broadcaster and experienced media manager, appears to be taking calls from CSOs for affordable access to the internet seriously. He has called on telecommunication companies and the sector regulator, Malawi Communication Regulatory Authority, to work on modalities to make the internet more affordable.

If actualised, this would go a long way in addressing the information gap in the country and sustaining democracy.

Meanwhile, NPL and The Times Group have made efforts to promote awareness about misinformation, as in the case of the illustrations below: 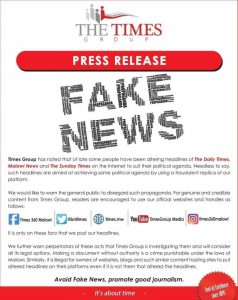 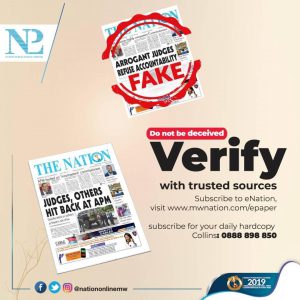 Combined efforts of operationalising the access to information law and improving internet affordability by the government, together with sensitisation campaigns by media houses would go a long way in rebuilding trust and legitimacy of both institutions. However, additional efforts in promoting availability of information in local languages would further support verification of information at citizen’s disposal towards enhancing the power of access to information.

Jimmy Kainja is a 2020 CIPESA Fellow focussing on the areas of hate speech and misinformation, data protection, and access to information