This statement was originally published on freedomforum.org.np on 4 September 2019.

National Assembly members agreed to reform regressive provisions in the media council bill after taking suggestions from stakeholders and reiterating the preparation and process of reform as per the demand of the concerned parties. The commitment of policy makers came during a multi-stakeholder discussion on the “Media Council Bill”, organized on 25th August 2019 by Freedom Forum in Kathmandu. Various National Assembly (NA) members, editors, former representatives of the Press Council, lawyers and other concerned media stakeholders participated in the policy dialogue event on the proposed bill, which has been already registered in the parliament (NA)

Highlighting the objective and major provisions in the bill, Freedom Forum’s Project Manager Sanjeeb Ghimire presented a brief outline of the bill, the positive and negative aspects and its perceived impact, along with suggestions for further amendment.

Meanwhile, various speakers expressed their concerns over provisions in the bill. One of the former members of the Press Council, Harihar Birahi, felt that the proposed Media Council Bill should include new provisions that can address the present day challenges of the media. He also voiced his concern about a trend to draft laws without without engaging stakeholders in the process. 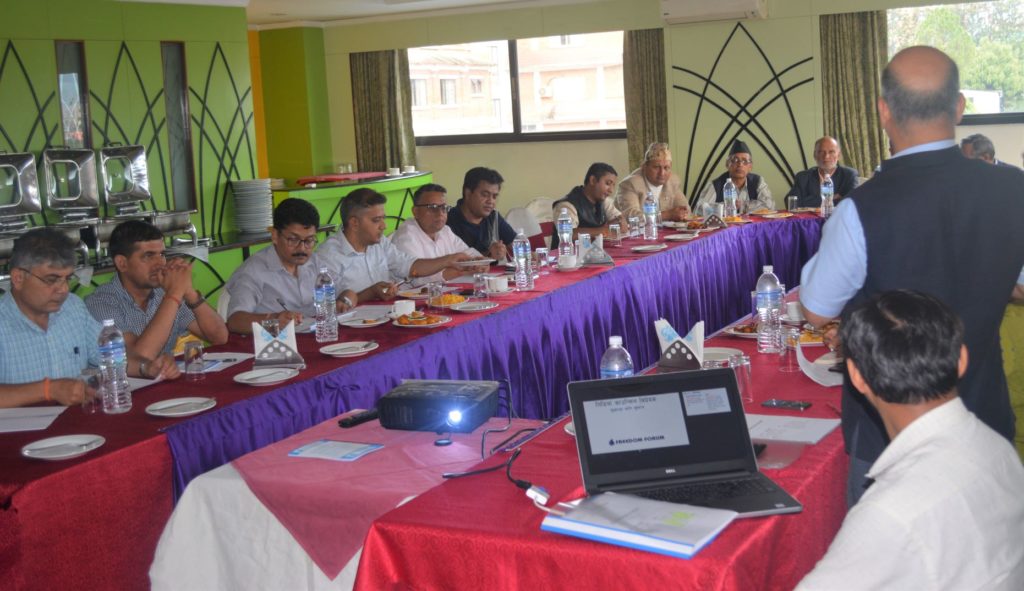 Showing concern from the media fraternity, Chief-editor of Himalaya TV, Binod Dhungel raised questions about the proposed structure and its inclusiveness and the balancing of the conflict of interest between different council members. Prakash Rimal, editor of The Himalayan Times, found that instead of imagining a media that acts responsibly, the bill serves as a controlling medium. Another editor from Nagarik Daily, Gunaraj Luitel, said freedom of speech should not be halted only because of certain reports. Laws are always welcome to make journalism more responsible but such harsh and regressive laws always place undue strain on journalists. Subash Ghimire, editor of Republica, expressed that in-house gate keeping is a kind of internal regulation which is being practiced. He suggested that there is a reconsideration of the lead position in the council, and assess who will be the best fit.

Khimlal Lal Bhattarai, member of the National Assembly, stated that it would be easy for us to learn about a issue in a better way. Press freedom is necessary, and the provisions which are harmful in the bill will be revised, and we remain committed to that, he said.

Another member of the National Assembly, Pramila Kumari, said that positive suggestions had been gathered about the proposed amendment. She also expressed her concern about a participatory and inclusive body in the media council.

Brikhesh Chandra Lal, member of the National Assembly, emphasized on press freedom. In regards to the amendment, the media leaders need to know more about the negative impact of erroneous news. However, this does not mean that the press should be controlled in the name of fulfilling laws.

Dinanath Sharma, member of the National Assembly, said that changes in the bill are natural and no government can control it. The bill will be certainly be reformed and move further after taking into account the stakeholders’ suggestions.