This statement was originally published on 7amleh.org on 15 June 2021.

7amleh published the findings of the Index of Racism, Hatred and Incitement against Arabs and Palestinians. It was shared online in Hebrew from the 6th to the 21st May 2021, particularly at the height of the last Israeli aggression on Palestinians, which included a series of violations that extended to the digital realm and threatened the digital rights of Palestinians. The findings show a 15-fold increase in violent speech compared to the same time period last year. 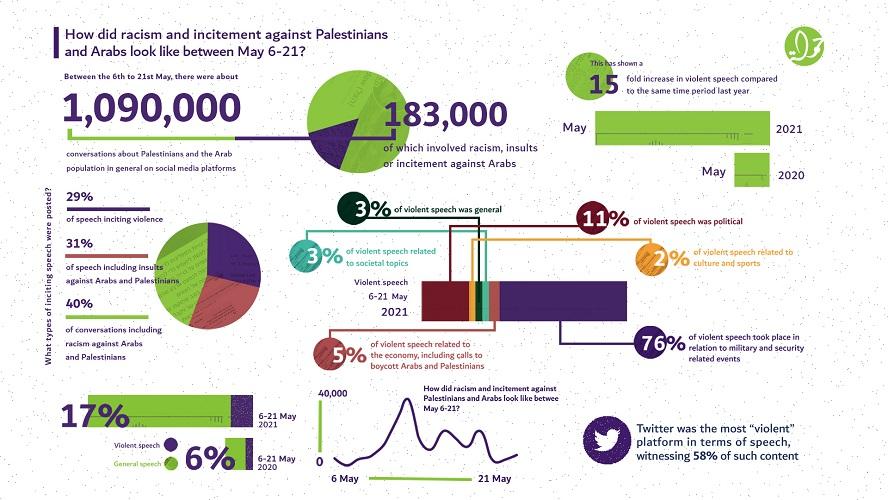 The findings also show that there were 183,000 conversations that included racism, insults or incitement against Arabs, out of 1,090,000 conversations the report monitored, which addressed Arabs and Palestinians generally on the internet. 29% of such speech incited violence, while 31% included insults against Arabs and Palestinians, and 40% included racist conversations against Palestinians and Arabs. As for the types of violent speech, 76% was posted in relation to “security and military” events, while 11% was political, mostly targeting Arab members of the Knesset in relation to forming a new government that would rely on Arab parties, and 5% was economic, mainly calling for the boycott of Palestinians and Arabs. According to the Index, Twitter was found to be the most “violent” platform in terms of speech, witnessing around 85% of such content.

The Index of Racism and Incitement on the internet, is a report that monitors overlaps in the use of labels and words that are racist against Arabs and Palestinians. The center conducted this report in this specific period, due to the dramatic increase in both attacks against Palestinian content, as well as Israeli incitement and violent speech on the digital space.