This statement was originally published on eff.org on 9 March 2021.

Hailey Rodis, a student at the University of Nevada, Reno Reynolds School of Journalism, was the primary researcher on this report. We extend our gratitude to the dozens of other UNR students and volunteers who contributed data on campus police to the Atlas of Surveillance project.

It may be many months before college campuses across the U.S. fully reopen, but when they do, many students will be returning to a learning environment that is under near constant scrutiny by law enforcement.

A fear of school shootings, and other campus crimes, have led administrators and campus police to install sophisticated surveillance systems that go far beyond run-of-the-mill security camera networks to include drones, gunshot detection sensors, and much more. Campuses have also adopted automated license plate readers, ostensibly to enforce parking rules, but often that data feeds into the criminal justice system. Some campuses use advanced biometric software to verify whether students are eligible to eat in the cafeteria. Police have even adopted new technologies to investigate activism on campus. Often, there is little or no justification for why a school needs such technology, other than novelty or asserted convenience.

In July 2020, the Electronic Frontier Foundation and the Reynolds School of Journalism at University of Nevada, Reno launched the Atlas of Surveillance, a database of now more than 7,000 surveillance technologies deployed by law enforcement agencies across the United States. In the process of compiling this data we noticed a peculiar trend: college campuses are acquiring a surprising number of surveillance technologies more common to metropolitan areas that experience high levels of violent crime.

So, we began collecting data from universities and community colleges using a variety of methods, including running specific search terms across .edu domains and assigning small research tasks to a large number of students using EFF’s Report Back tool. We documented more than 250 technology purchases, ranging from body-worn cameras to face recognition, adopted by more than 200 universities in 37 states. As big as these numbers are, they are only a sliver of what is happening on college campuses around the world. 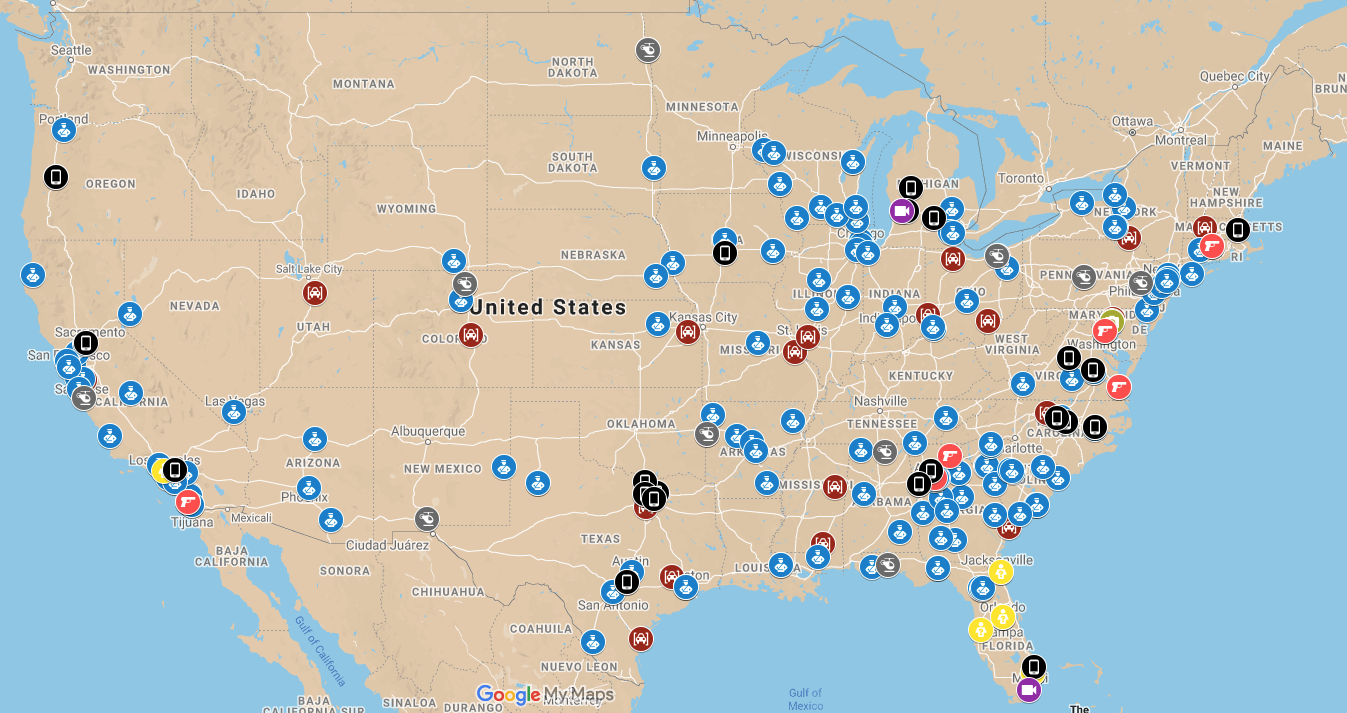 Download the U.S. Campus Police Surveillance dataset as a CSV.

Maybe your school has a film department, but the most prolific cinematographers on your college campus are probably the police.

Since the early 2010s, body-worn cameras (BWCs) have become more and more common in the United States. This holds true for law enforcement agencies on university and college campuses. These cameras are attached to officers’ uniforms (often the chest or shoulder, but sometimes head-mounted) and capture interactions between police and members of the public. While BWC programs are often pitched as an accountability measure to reduce police brutality, in practice these cameras are more often used to capture evidence later used in prosecutions.

Policies on these cameras vary from campus to campus – such as whether a camera should be always recording, or only during certain circumstances. But students and faculty should be aware than any interaction, or even near-interaction, with a police officer could be on camera. That footage could be used in a criminal case, but in many states, journalists and members of the public are also able to obtain BWC footage through an open records request.

Aside from your run-of-the-mill, closed-circuit surveillance camera networks, BWCs were the most prevalent technology we identified in use by campus police departments. This isn’t surprising, since researchers have observed similar trends in municipal law enforcement. We documented 152 campus police departments using BWCs, but as noted, this is only a fraction of what is being used throughout the country. One of the largest rollouts began last summer when Pennsylvania State University announced that police on all 22 campuses would start wearing the devices.

One of the main ways that universities have purchased BWCs is through funding from the U.S. Department of Justice’s Bureau of Justice Assistance. Since 2015, more than 20 universities and community colleges have received funds through the bureau’s Body-Worn Camera Grant Program established during the Obama administration. In Oregon, these funds helped the Portland State University Police Department adopt the technology well ahead of their municipal counterparts. PSU police received $20,000 in 2015 for BWCs, while the Portland Police Department does not use BWCs at all (Portland PD’s latest attempt to acquire them in 2021 was scuttled due to budget concerns).

Drones, also known as unmanned aerial vehicles (UAVs), are remote-controlled flying devices that can be used to surveil crowds from above or locations that would otherwise be difficult or dangerous to observe by a human on the ground. On many campuses, drones are purchased for research purposes, and it’s not unusual to see a quadrotor (a drone with four propellers) buzzing around the quad. However, campus police have also purchased drones for surveillance and criminal investigations.

Our data, which was based on a study conducted by the Center for the Study of The Drone at Bard College, identified 10 campus police departments that have drones:

One of the earliest campus drone programs originated at the University of North Dakota, where the campus police began deploying a drone in 2012 as part of a regional UAV unit that also included members of local police and sheriffs’ offices. According to UnmannedAerial.com, the unit moved from a “reactive” to a “proactive” approach in 2018, allowing officers to carry drones with them on patrol, rather than retrieving them in response to specific incidents.

Colleges and universities are also watching their students on social media, and it is not just to retweet or like a cute Instagram post about your summer internship. Campus public safety divisions employ social media software, such as Social Sentinel, to look for possible threats to the university, such as posts where students indicate suicidal ideation or threats of gun violence. We identified 21 colleges that use social media monitoring to watch their students and surrounding community for threats. This does not include higher education programs to monitor social media for marketing purposes.

This technology is used for public safety by both private and public universities. The Massachusetts Institute of Technology has used Social Sentinel since 2015, while the Des Moines Area Community College Campus Security spent $15,000 on Social Sentinel software in 2020.

Social media monitoring technology may also be used to monitor students’ political activities. Social Sentinel software was used to watch activists on the University of North Carolina campus who were protesting a Confederate memorial on campus, Silent Sam. As NBC reported, UNC Police and the North Carolina State Bureau of Investigation used a technique called “geofencing” to monitor the social media of people in the vicinity of the protests.

The post Scholars under surveillance: How campus police use high tech to spy on students appeared first on IFEX.