This statement was originally published on wan-ifra.org on 6 July 2021.

One in two women has suffered sexual harassment in the workplace in Africa. One in two. Allow that to sink in – and then consider that only 30 per cent of these cases are reported. 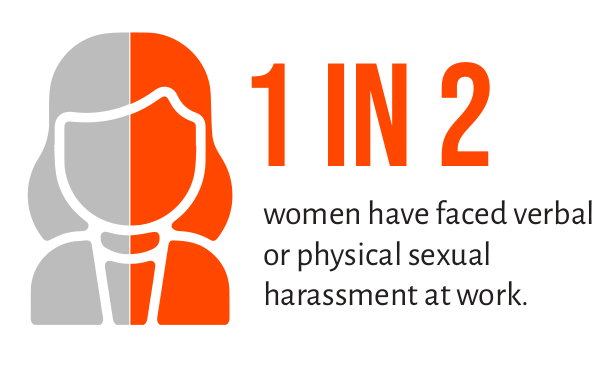 Full results of the research

New research from Women in News on sexual harassment in African media organisations highlights the scale of the problem – and the numbers make for worrying reading.

Conducted in eight countries in the continent and with 584 respondents, the research found women stay silent because of a fear of retaliation and a lack of faith that their organisations will do anything about their reports.

And the numbers support this thinking. The research found that of the cases reported, organisations took action only 42 per cent of the time. And even then, the most common response was to warn the perpetrator, followed by emotional support for the victim, dismissal of cases after review, and providing training for staff on sexual harassment.

Stamping out the vice is further complicated by the fact that two out of five times, the perpetrator is a person in authority.

Nelly, who works in a newsroom in Zimbabwe – one of the countries surveyed, alongside Botswana, Kenya, Malawi, Rwanda, Tanzania, Uganda and Zambia – termed the sexual harassment situation “disheartening as it remains unresolved almost 20 years since I joined the media industry”.

“Universities and colleges are churning out graduates who are talented and conversant with the technology the media needs to survive, but six months after their being hired, they leave their organisations. They are leaving because the ‘boys’ club’ that rules the media has refused to change,” she said.

Nelly said the stories of how toxic the newsroom can be has led to young graduates shunning journalism.

“There was a graduate trainee who was at an evening assignment that ended at about 10pm. When she called the office for transport home, she was told the company drivers had all left. Her boss, however, offered to pick her up and since she didn’t have any other options, she agreed. When the boss came to pick her up, he arrived with his girlfriend. The trainee sat in the backseat and was subjected to her boss and his girlfriend kissing each other the entire 30 minutes it took to get to her house. Days later, her boss brought up the incident, telling her he could treat her in a similar fashion and give her even more so she would never have to worry about transport. Three months later, the trainee quit,” recalled Nelly, who asked that her full name not be used as she was not authorised to speak on the matter.

It is, unfortunately, an all-too-common narrative across the region’s newsrooms – and it does not affect only women. The research found that 43 per cent of gender non-conforming individuals and 19.5 per cent of men had faced unwanted sexual attention.

Among men, one in five had experienced verbal sexual harassment and about one in 10 had faced physical harassment.

“We have a long way to go before staff are convinced and comfortable that if there are incidents of harassment, they can report them and action will be taken without their further victimisation,” said WIN Africa Director Jane Godia.

Respondents said fear of losing their jobs, of being negatively labelled and of facing some form of retaliation from the perpetrator and their peers stops them from filing formal complaints.

The research, which is the first phase of a multi-region study, found that nearly half of those surveyed (46.7 per cent) worked for organisations with no sexual harassment policy in place. Yet, in supplementary interviews with 32 media managers, 46 per cent said the industry no longer has a sexual harassment problem – but this was despite more than half of them reporting that they had been victims of the vice.

While change may be slow in coming, however, there are small wins being recorded across the region. Women in News, for instance, through its advisory partnerships in Africa, is working with 30 member organisations across eight countries to institute sexual harassment policies that provide clear reporting mechanisms to make newsrooms safer.

“Newsrooms need as much information and support as possible to ameliorate the challenges posed by sexual harassment within the workplace by colleagues and in the field by sources,” said WIN Advisory Manager Susan Makore.

The research provides evidence of the need for media organisations to recognise how widespread sexual harassment is, and to put in place plans and policies that create a safer working environment that allows for talent retention and industry growth.

“It all starts with a conversation on what is and isn’t acceptable behaviour in your media organisation – being explicit about sexual harassment – sharing definitions, what behaviours are unacceptable and communicating the right of every employee to be treated equally. It is far better to be proactive and prepared than pushed into a crisis management position when a case emerges,” said Women in News Executive Director Melanie Walker.

The full results of the research are available here. 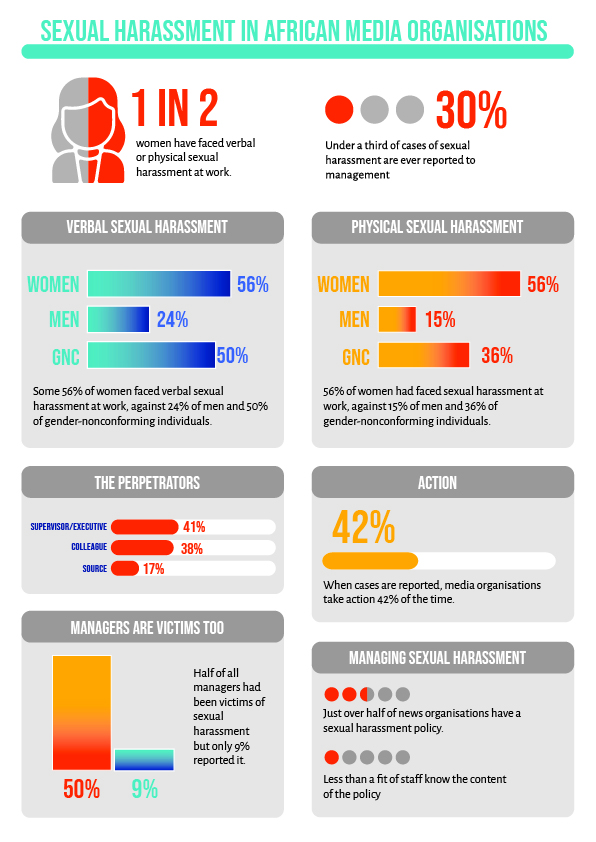